Hot Searches:
Solemn Declaration Language
You are here:Home » Testimonies » I Experienced This Way When I Prayed to the Lord but Received No Response

Editor’s Note: When we encounter difficulties and pray to the Lord, the Lord often opens ways out for us and helps us overcome them. But when our prayers do not gain the Lord’s answer, how should we experience our situation? The author of this article has experienced this—let’s take a look together.

I remember that day when I was upstairs shelling corn and my daughter, not yet one year old, was playing beside me, she accidentally fell off the story, landing on the side of the steps on the first floor, and stopped breathing on the spot. I was frightened into crying loudly. Hearing my cries my mother-in-law came running out of her room. When she saw my daughter lying still on the ground, she told me to kneel down and pray to the Lord with her. At that time, I had no concept of believing in the Lord, but in order to save my daughter, I quickly followed my mother-in-law in calling out to the Lord, asking Him to save my daughter.

About ten minutes passed and my daughter still hadn’t reacted at all. Seeing my mother-in-law was still praying on her knees, I could hardly wait any longer, so I hurriedly picked my daughter up and was going to rush her to the clinic. Just then, I suddenly felt the rise and fall of my daughter’s chest, which was against mine. I exclaimed with excitement: “She made it! She’s come back to life!” I then saw that my daughter’s complexion was looking a little better. My mother-in-law said that it was the Lord who saved my daughter. I was surprised to hear her say this, thinking: “The Lord she believes in really has great power! My daughter just wasn’t breathing, but after my mother-in-law prayed, she miraculously came back to life.” From then on, I followed my mother-in-law in believing in the Lord, and copied out hymns as well as read the Lord’s prayer and the scriptures for several elderly sisters. As time went on, I gradually appreciated that it was truly good to believe in the Lord and have something to lean on.

When my daughter was six years old, one day, she suddenly developed a high fever and a headache. I thought she might have caught a cold and then bought some medicine for her in an infirmary. However, after two or three days of medicine, she was no better and kept yelling that she had a headache. Thinking that I needed to rely on the Lord, I hurried to go to church that evening. But after a few days there wasn’t any improvement in my daughter’s condition. Seeing that, I began to feel panicked, and I thought: “The fever burns in her, could she possibly get a strange disease?” I hastily carried her to a village doctor. I constantly prayed to the Lord along the way, asking Him to reveal His might in my daughter. After praying, I thought: “With the Lord’s protection, my daughter’s life probably won’t be in much danger.”

When we got to the infirmary, after checking the situation, the doctor said that my daughter might have brain fever and advised me to take her to the hospital as soon as possible. What he said sent me into a panic and tears flowed from my eyes. I thought: “The brain fever is not a minor illness. If it can’t be cured, the patient will be handicapped for life. My neighbor’s daughter got brain fever and suffers from the after-effects, being mentally handicapped. The daughter of another neighbor has become lame in her leg because of the illness. What if my daughter really does have brain fever and becomes handicapped like them?” As my daughter kept yelling that she had a headache, my husband and I had to take her to the hospital. On the way there I prayed to the Lord nonstop: “Lord Jesus! Please protect my daughter from having brain fever. Please prevent this matter from happening to me …”

At the hospital, by the time the doctor diagnosed my daughter after a series of tests, she had already been unconscious. Then several doctors surrounding my daughter examined her, but there was no response at all. Seeing this made me feel even more afraid, so I continued to call on the Lord. Later, the test results confirmed that my daughter had brain fever, which instantly chilled my heart. I had little inclination to pray over the following few days and I lost my faith in the Lord. I thought: “I have been constantly praying to the Lord. Why doesn’t the Lord protect my daughter? It’s very probable that she won’t be cured. Even if she is cured, she will be left with complications afterward—being handicapped for life.” Thinking this, I implored the doctors to give my daughter good drugs and try their best to cure her.

A few days later, my daughter’s headache went away, but her fever still didn’t break, and she was in a coma all the time. I was anxious, thinking: “She’s received IV drips for a few days, so why hasn’t she gotten better? What if the fever doesn’t go away and leaves its mark?” The doctors also felt worried, and there being nothing they could do, a doctor said to me helplessly: “We’ve tried many medicines, but your daughter’s fever still doesn’t recede. We’re going to give her a blood test now and try another medicine.”

The next day, my daughter was still feverish. I heard the doctor tell a nurse: “The child hasn’t responded to any of the medicines we’ve used. The only thing to do now is to try Roxithromycin, but the risk factors are great. If it doesn’t bring the fever down, then there will be nothing else we can do; we will just ask her relatives to prepare for the worst.”
After hearing this, I suddenly felt despairing and helpless, thinking: “There is almost nothing else the doctors can do. Could it be that my daughter’s illness is really going to leave its mark? If she becomes handicapped, what will we do in the future?” I stayed awake all that night, tossing and turning in bed, and my tears soaked my pillowcase.

In my pain, I came before the Lord and prayed: “Lord! Where are You? Why haven’t I received Your response to my prayers?” Just when I was in despair and had nowhere to turn, I suddenly thought of the miracle of Lazarus’ resurrection by the Lord Jesus after being dead for four days. I also remembered that I had witnessed how the doctor failed to rescue my neighbor’s three-year-old daughter, who fell down the staircase and immediately stopped breathing, but one hour after brothers and sisters all prayed for her, she came back to life. There was also my daughter. She fell downstairs and then had no breath—a normal person couldn’t be saved after stopping breathing for several minutes—but after over ten minutes, the Lord allowed her to come back to life. Just as the Lord Jesus said: “If you can believe, all things are possible to him that believes” (Mark 9:23). From this, I saw that as long as we had true faith in the Lord, we would surely be able to witness the Lord’s deeds. As I thought through this, I felt like I had just caught hold of a lifeline—I was feeling a shred of hope in my heart.

Thereupon, I prayed in my heart over and over: “Lord! When my daughter fell off the second story and ceased breathing, it was You who saved her. This time her illness is also in Your hands. I’m willing to rely on You.” After the prayer, I thought of Job in the Bible. When his children were crushed in the collapse of his house overnight, he said: “Jehovah gave, and Jehovah has taken away; blessed be the name of Jehovah” (Job 1:21). During the tremendous trial, Job didn’t complain and was even able to hold fast to his faith in God and stand witness for God. I then thought of myself. I only knew to make demands of the Lord, and when I couldn’t see the Lord’s deeds, I would blame Him and lose my faith in Him. I was so rebellious! The more I thought about it the more ashamed I felt. I knew that in that environment, I should emulate Job, keep faith in the Lord and stand witness for the Lord.

Thinking this, I prayed to the Lord: “Lord, I’m wrong. I shouldn’t blame You. I entrust my daughter’s illness to You. I’m willing to submit to Your sovereignty. Even if she can’t be cured, I will not complain to You again.” After I prayed, my heart calmed down a little.

On the fourth day, my daughter gradually regained consciousness, her high fever broke and her headache went away. When I saw that, the anxiety in my heart immediately lessened, and I yelled joyfully: “Thank the
Lord! Thank the Lord!” At that time, I remembered that the Lord resurrected Lazarus who had died four days earlier, and made cripples walk and the blind see. I thought: “Today, the Lord’s great power is truly revealed in my daughter, and this allows me to see that the Lord’s deeds are unfathomable. The Lord Jesus has authority and power, and He can raise the dead. There are things that are out of our hands, but the Lord is capable for everything. As long as we truly trust in the Lord Jesus, we will be able to see His deeds. Just as the Lord Jesus said: ‘I am the resurrection, and the life: he that believes in Me, though he were dead, yet shall he live’ (John 11:25).”

After he examined my daughter, the doctor said to me in amazement: “In normal circumstances we won’t try Roxithromycin; sometimes even if we try it, it doesn’t work at all. Your daughter is so fortunate; she is fine now. You thank the Lord, and so do I.” The day after my daughter came to, she could sit up, laughing and talking. Another person in the ward said enviously: “My child has been in hospital for over twenty days, but he is still running a high fever. Surprisingly, your daughter has only been treated for eight or nine days, yet her fever has receded.” Another child’s mother said: “My child is given the same medicine, but it doesn’t work. How come your daughter’s gotten better so quickly?” I said gratefully: “This is thanks to the Lord! It was the Lord who cured my daughter!”

Afterward, the doctor saw how my daughter was completely healthy again and could run around, and recommended that we get her discharged. He also said: “I hadn’t imagined that your daughter would recover so well, without any trace of ever having the illness. It’s incredible!” Hearing this, my heart was filled with gratitude to the Lord. Thanks be to the Lord!

Through this experience, I truly saw the Lord’s wondrous deeds. I also realized that we pray and call out to the Lord but do not get His immediate response probably because we have the wrong state of mind and are disobedient to the Lord, or because the Lord is testing our faith. As long as we are able to remain faithful to the Lord and truly submit to Him, then the Lord’s deeds shall appear to us. 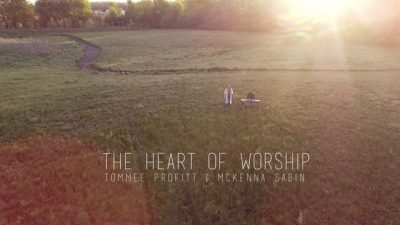 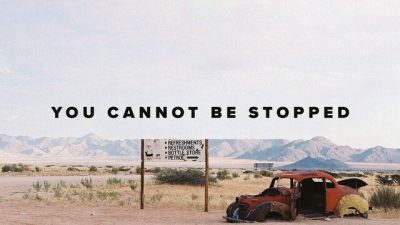 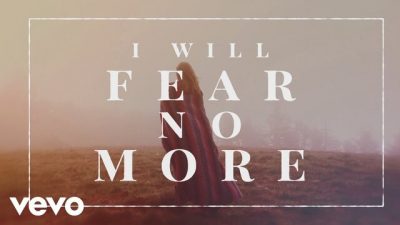 The Afters – I Will Fear No More (Official Lyric Video) 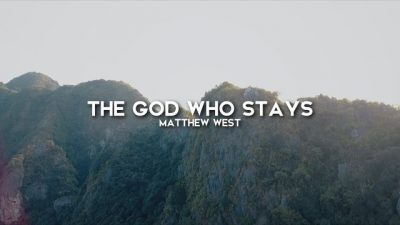 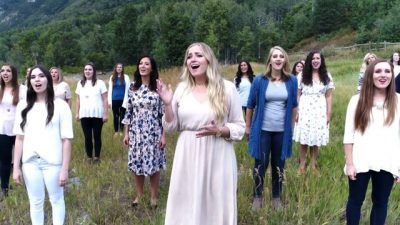 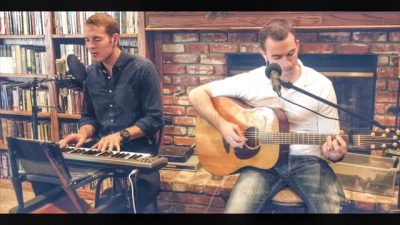 Before the Throne of God Above